Winter is Coming ! How a Russian Natural Gas Cutoff Could Weigh on Europe’s Economies

Winter is Coming ! How a Russian Natural Gas Cutoff Could Weigh on Europe’s Economies

The partial shutoff of gas deliveries is already affecting European growth, and a full shutdown could be substantially more severe.

Russia’s invasion of Ukraine has further darkened the global growth outlook, with the European econom facing a serious setback given trade, investment, and financial links with the warring countries. Now, Europe is enduring a partial cutoff of natural gas exports from Russia, its largest energy supplier.

The prospect of an unprecedented total shutoff is fueling concern about gas shortages, still higher prices, and economic impacts. While policymakers are moving swiftly, they lack a blueprint to manage and minimize impact.

Three new IMF working papers examine these important issues. They examine how fragmented markets and delayed price pass-through can aggravate impacts, the role of the global liquefied natural gas market in moderating outcomes, and how such factors could play out in Germany, Europe’s largest economy.

Our work shows that in some of the most-affected countries in Central and Eastern Europe—Hungary, the Slovak Republic and the Czech Republic—there is a risk of shortages of as much as 40 percent of gas consumption and of gross domestic product shrinking by up to 6 percent. The impacts, however, could be mitigated by securing alternative supplies and energy sources, easing infrastructure bottlenecks, encouraging energy savings while protecting vulnerable households, and expanding solidarity agreements to share gas across countries.

Dependence on Russia for gas, and other energy sources, varies widely by country. 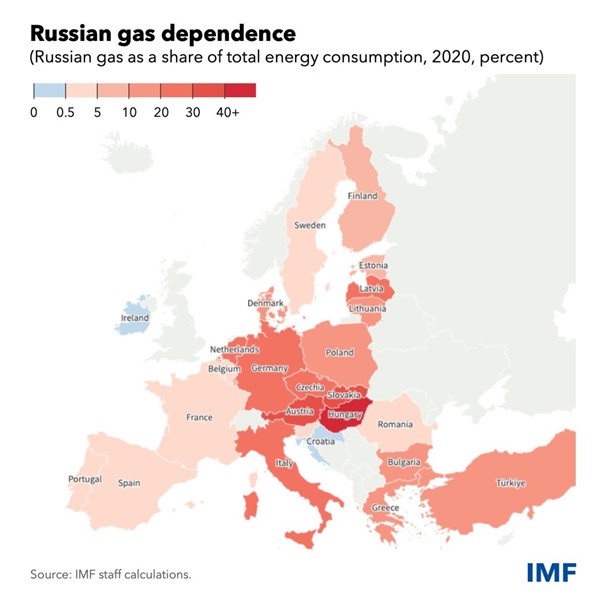 European infrastructure and global supply have coped, so far, with a 60 percent drop in Russian gas deliveries since June 2021. Total gas consumption in the first quarter was down 9 percent from a year earlier, and alternative supplies are being tapped, especially LNG from global markets.

Our work suggests that a reduction of up to 70 percent in Russian gas could be managed in the short term by accessing alternative supplies and energy sources and given reduced demand from previously high prices.

This explains why some countries have been able to unilaterally halt Russian imports. However, diversification would be much harder in a total shutoff. Bottlenecks could reduce the ability to re-route gas within Europe because of insufficient import capacity or transmission constraints. These factors could lead to shortages of 15 percent to 40 percent of annual consumption in some countries in Central and Eastern Europe.

We gauge impacts two ways. One is an integrated-market approach that assumes gas can get where it is needed, and prices adjust. Another is a fragmented-market approach that is best used when the gas cannot go where needed no matter how much prices rise. However, estimation is complicated by the fact that the hit to the European economy is already happening.

Using the integrated-market approach—as the market remains so—to estimate the direct impact to date suggests that it may have amounted to a 0.2 percent reduction for European Union economic activity in the first half of 2022.

When we consider a full Russian gas shutoff from mid-July, we focus on the impact relative to a baseline of no supply disruption this year. This simplifies the estimation and makes it comparable with other economic research.

We derive a broad range of estimates of impact over the next 12 months. Reflecting the unprecedented nature of a full Russian gas shut-off, the right modeling assumptions are highly uncertain and vary between countries.

If EU markets remain integrated both internally and with the rest of the world, our integrated-market approach suggests that the global LNG market would help buffer economic impacts. That is because reduced consumption is distributed across all countries connected to the global market. At the extreme, assuming no LNG support, the impact is magnified: soaring gas prices would have to work by depressing consumption only in the EU. 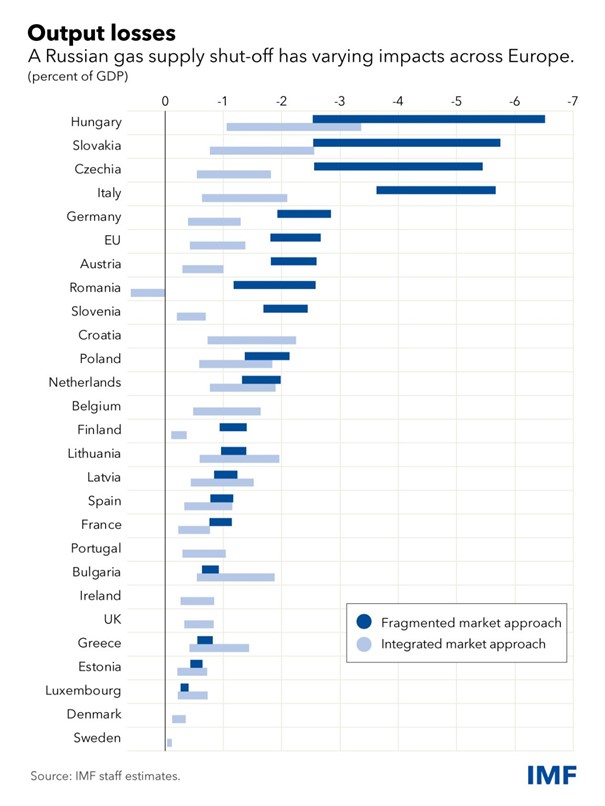 If physical constraints impede gas flows, the fragmented market approach suggests that the negative impact on economic output would be especially significant, as much as 6 percent for some countries in Central and Eastern Europe where the intensity of Russian gas use is high and alternative supplies are scarce, notably Hungary, the Slovak Republic and the Czech Republic. Italy would also face significant impacts due to its high reliance on gas in electricity production.

The effects on Austria and Germany would be less severe but still significant, depending on the availability of alternative sources and the ability to lower household gas consumption. Economic impacts would be moderate, possibly under 1 percent, for other countries with sufficient access to international LNG markets.

We dug deeper to understand the German outlook and policy options in the event of a full shutoff. Starting with the baseline outlook in our Article IV Consultation—which already embeds the existing partial shutoff—we extended the assessment through 2027 and incorporated additional demand-side impacts that stem from the uncertainty that households and firms face, and which reduce aggregate consumption and investment.

Our estimates suggest uncertainty channels would notably add to the economic impacts from a full shutoff. Impacts would peak next year, then fade as alternative gas supplies become available.

The rise in wholesale gas prices could also increase inflation significantly which we explicitly study in our work on Germany. Simulations also illustrate that voluntary consumer conservation could reduce economic losses by one-third, and a well-designed rationing plan, which for example lets downstream users and gas-intensive industries bear more of the shortages, could reduce them by up to three-fifths.

Countries that already encourage households and businesses to save energy include Italy, where the government mandates minimum and maximum levels for heating and cooling. REPowerEU, the European Commission’s plan, also contains measures to conserve energy and reduce dependence on Russian fuels.

There is still a gap, however, between ambition and reality. Forthcoming IMF research shows that many countries have chosen policies which strongly limit how wholesale prices are passed on to consumers. A better alternative would be to allow greater passthrough to incentivize conservation while offering targeted compensation to households that can’t afford higher prices.

This research shows that the economic fallout from a Russian gas shutoff can be partially mitigated. Beyond measures already taken, further action should focus on risk mitigation and crisis preparedness.

Governments must boost efforts to secure supplies from global LNG markets and alternative sources, continue to alleviate infrastructure bottlenecks to import and distribute gas, plan to share supplies in an emergency across the EU, act decisively to encourage energy savings while protecting vulnerable households, and prepare smart gas rationing programs.

This is a moment for Europe to build upon the decisive action and solidarity displayed during the pandemic to address the challenging moment it faces today.

Which Country Should Turkiye Align With?
By Turkiye Report  March 2022   In our March...

Why is Türkiye Signalling for a New Anti-PKK Operation in Syria?
ANATOLIA REPORT June 2022 The Turkish operation preparations continue as...
BİR YORUM YAZIN