On May 27, 2013, activists who wanted to prevent the reconstruction of the Topçu Kışlası by standing in front of construction equipment in Taksim Gezi Park were subjected to a disproportionate police response. At the time, the government and society did not know that the protests would spread throughout the country and become a key social movement in Turkish history. During the protests, which lasted for about three weeks, about 10,000 people were injured and 8 civilians and 2 police officer lost their lives.

However, the Gezi Park protests were seen by the ruling party as a planned attempt to bring down the government. According to government, the key name in the protests was Osman Kavala. Kavala has also frequently been singled out for criticism by President Recep Tayyip Erdoğan. President Erdoğan claimed in a statement, “This man was the Soros of Turkey. This man was behind the scenes of the Gezi events, he was the coordinator.” The verdict in the 2013 Gezi Park protests trial was announced Monday, April 25. The court ruled that businessman Osman Kavala would be sentenced to life in prison for “attempting to destroy the Republic of Turkey by using force and violence.” The court also handed out 18 year sentences to 7 activists, Mücella Yapıcı, Çiğdem Mater, Ali Hakan Altınay, Mine Özerden, Can Atalay, Tayfun Kahraman and Yiğit Ali Ekmekçi. On March 26, 2020, the prosecutor had acquitted 25 defendants of the charge of “belonging to an armed terrorist organization.”

Two years later, the court prosecutor changed his acquittal opinion in the supplementary report he submitted on April 22, 2022 and demanded that the activists be convicted of all crimes. The decision in the Gezi trial has provoked a great reaction in society. While 51 people were arrested during the protests against the decision, the opposition stated that the verdict was taken for revenge and that it was “a threat to the whole society”. So was the verdict of the Gezi trial based on political motivations or legal reasons? As Türkiye Raporu, we tried to find out the opinion of our participants on the decisions of the Gezi trial, which created a great controversy in the society. 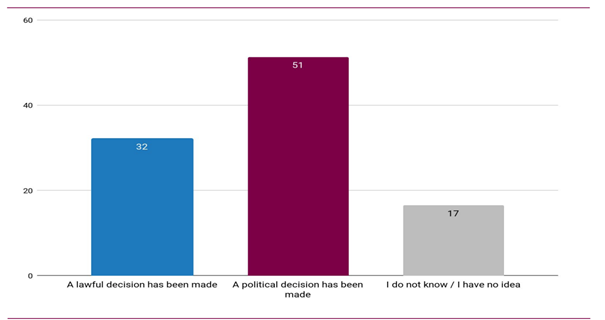 The majority (51%) of the participants think that a political decision was made in the Gezi trial, and 32% think that the decision is lawful. Those who say I don’t know/I don’t have an opinion have a remarkable share of 17%.

ÖNCEKİ KONU
Where Does Istanbul’s Name Come From?
SONRAKİ KONU
THE WORLD BANK “ Turkiye is Bracing for a Bumpy Road”
Tweetle
admin

Political Party Leader Success in Turkey
How successful do you find the following politicians on a...