Searching For a Hero: Who Can Improve The Economic Situation in Turkiye?

Searching For a Hero: Who Can Improve The Economic Situation in Turkiye? 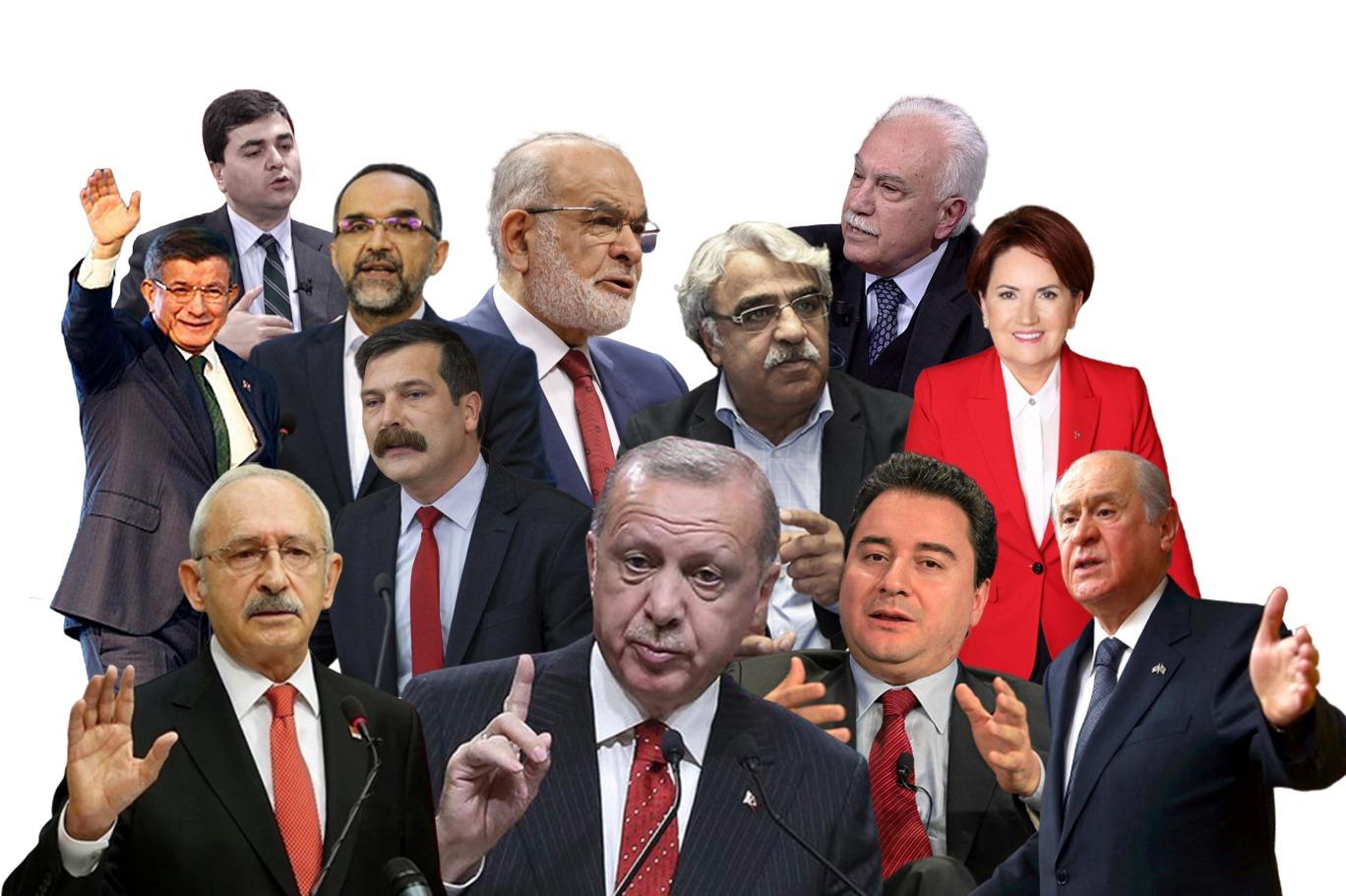 Turkiye is facing its biggest economic crisis in the last two decades. It is possible to understand the severity of the economic crisis through the data shared by institutions. According to the data of the Central Bank of the Republic of Turkiye (CBRT) for June, the current account deficit increased by USD  million. With the latest data, current account deficit was recorded for 8 consecutive months after October 2021. The CAD is at the highest level in the last fifteen months.

A similar picture is also seen in inflation. In July, inflation was realized as 79.6% according to TURKSTAT data and 176.04% according to ENAG (Inflation Research Group) data.

On the other hand, it can be seen that the decisions taken by the Central Bank have not been effective enough to reduce inflation. On August 18, the Central Bank decided to cut interest rates from 14% to 13%. Following the decision, the USD/TL crossed the 18 lira level for the first time since December 2021 and reached its annual peak.

Apart from the numbers, the changing experiences of the society in their daily lives also confirm that we are in a deepening economic crisis. In this sense, our February 2022 data sheds light on society’s struggle to make ends meet and to survive. When we asked the society how they coped with the successive hikes in energy prices, 59% said they changed their transportation preferences and started using public transportation, while 76% stated that they had reduced their electricity and natural gas consumption.

There is no doubt that economic crises affect not only social mobilizations but also political victories. In Turkiye, where the elections are approaching, voting in the upcoming elections will be determined by people’s views on which leader can manage to solve the economic problems.

In fact, many studies show that the evaluations on the current state of the economy and the future economic prospects have a significant impact on people’s voting behavior. A 2018 article also shows that economic variables played an important role in the 2016 US elections that elected Trump and the Brexit referendum. The study reveals that especially in the 2016 Austrian general elections and the Brexit referendum, variables such as unemployment and loss of benefit directly affected the rise of popzulism.

A similar study conducted in Spain examines whether economic problems have contributed to the rise of small parties. The article analyzes the impact of economic problems on voting behavior through support for the Podemos and Ciudadanos parties and argues that especially problems such as corruption play a role in the rise of these emerging parties. A similar study on the impact of economic problems on voting behavior was conducted in Turkiye at a time when the effects of the 2001 crisis were fading. In December 2003, when the survey was conducted, unemployment was still a problem, but the inflation rate had fallen significantly and economic growth increased. The results of the survey revealed that those with favorable economic views were planning to vote for the AK Party.

In light of these views, we asked our respondents which leader could overcome the economic problems. 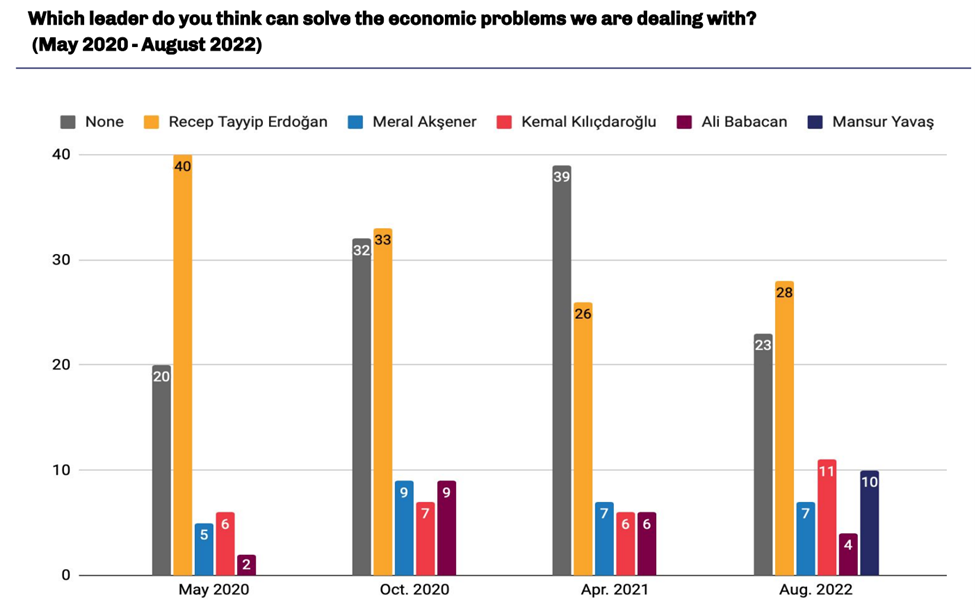 In August 2022, we asked this question for the fourth time.

The results show a particularly large drop in those who answered “None”. In April 2021, the percentage of “None”’ respondents was at its highest level with 39%. In August 2022, the percentage of respondents who answered “None” dropped to 23%. Which leader do you think can solve the economic problems we are dealing with? (May 2020 – August 2022) The rate of those who think that CHP leader Kılıçdaroğlu can solve economic problems increased by 5 points compared to April 2021. In the most recent results, Mansur Yavaş stands out in particular. In August 2022, the rate of those who think that Mansur Yavaş can solve economic problems was 10%. 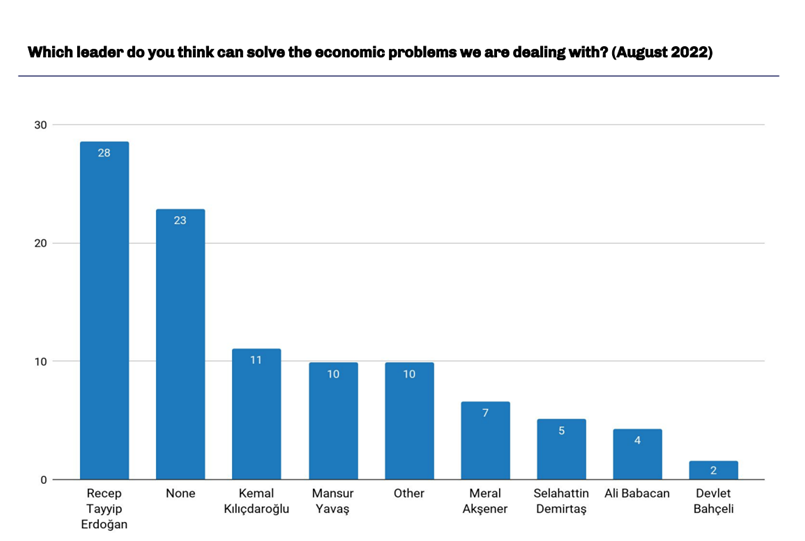 When we asked “Which leader do you think can solve the current economic problems?” 28% of the respondents said President Erdoğan.

It should be noted that we asked this question as an open-ended question and did not offer any options to the participants. 23% of the respondents do not believe that any leader can solve the economic problems.

(August 2022) Mansur Yavaş ranked just below Kılıçdaroğlu with 10%. 7% of the respondents think that Meral Akşener and 5% think that Selahattin Demirtaş will create policies that will help us overcome the economic crisis.

On the other hand, 5% think that Ali Babacan, the leader of the DEVA Party, can help us overcome the economic crisis. 2% think that Bahçeli will improve the economy. The responses including İmamoğlu, Karamollaoğlu, İnce, Özdağ and Davutoğlu were grouped under the heading “Other”, which corresponds to 10%. 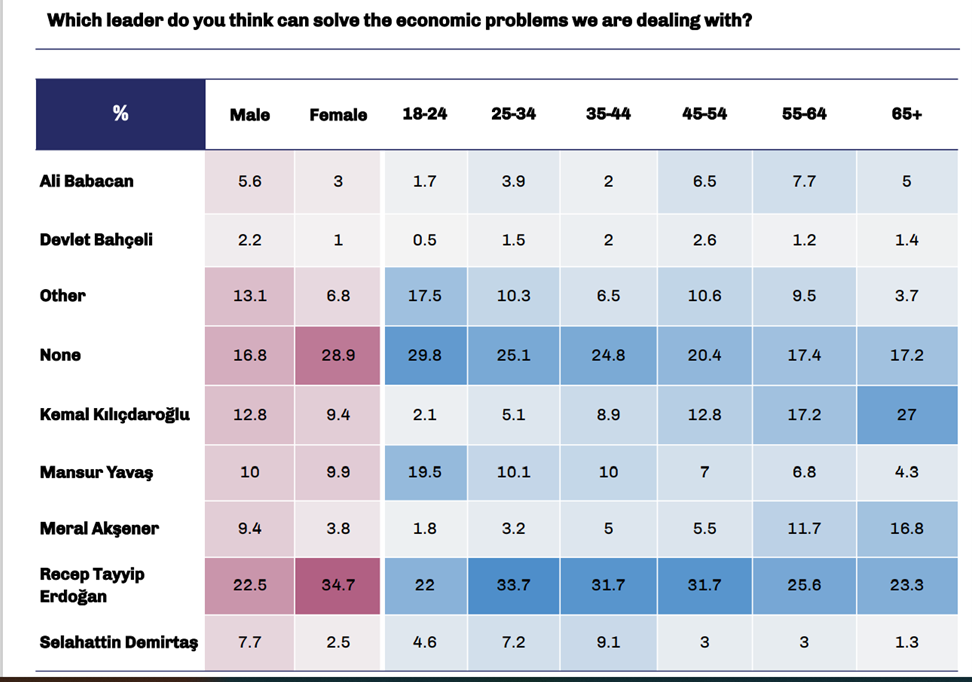 On the other hand, the proportion of female respondents who answered “None” is 12 points higher than the male respondents with 29%. In addition, 6% of males are in favor of Babacan, compared to 3% of women.

The youngest age group has the highest level of support for the view that no leader can solve the economy. The proportion of respondents answering “None” to the question gradually decreases as age increases.

While 30% of those aged 18-24 say that no leader can solve economic problems, this rate drops to 17% among those aged 65 and above. 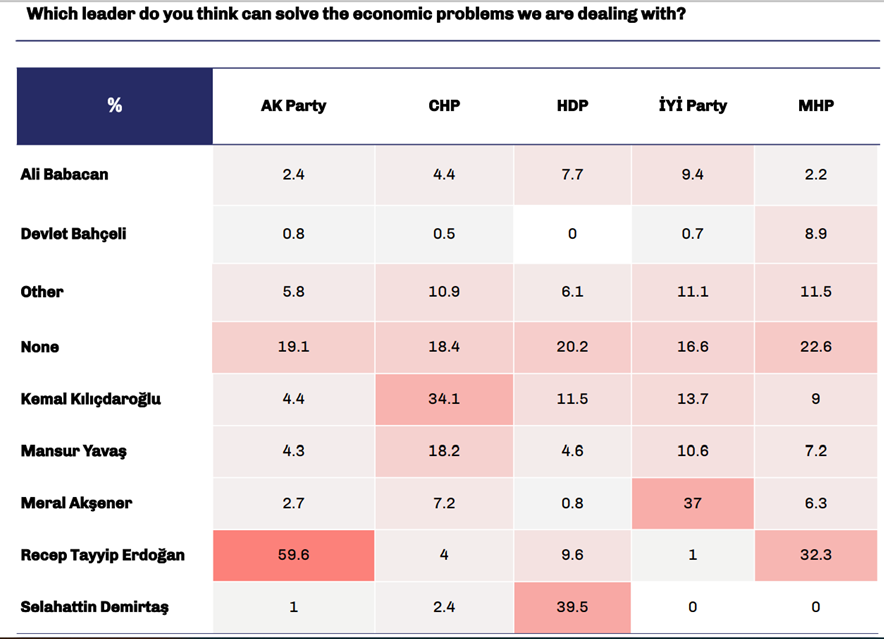 When we analyze the responses of voter groups, we observe that the majority in all groups, except for MHP voters, believe that the leader of the party they voted for in 2018 is able to solve the economic problems.

60% of respondents who voted for the AK Party in 2018 think that President Erdoğan can solve economic problems. In the MHP, the rate of those who prefer Erdoğan is 32%, which is higher than the rate of preference for Devlet Bahçeli among the sample of voters. On the other hand, 40% of HDP voters answered Selahattin Demirtaş and 37% of İYİ Party voters answered Meral Akşener.

While 34% of the respondents who voted for CHP in 2018 answered Kemal Kılıçdaroğlu, a significant 18% preferred Mansur Yavaş.

The rate of those who preferred Mansur Yavaş was 11% among İYİ Party voters and 7% among MHP voters.

Surprisingly, 9% of İYİ Party voters and 8% of HDP voters think that Ali Babacan, the leader of DEVA Party, can solve economic issues. These rates are above Ali Babacan’s average rate of 4%.

On the other hand, the voter group with the highest rate of “None” responses is MHP with 23%.