Ukraine and Russia, two neighboring countries in war since February, have signed two historic deals with Türkiye and the U.N. for the creation of a secure food corridor through the Black Sea under a comprehensive plan, dubbed the Black Sea Initiative, that would prevent a major global food crisis.

The ceremony held at the Dolmabahçe Palace on the Bosporus observed the participation of President Recep Tayyip Erdoğan and U.N. Secretary-General Antonio Guterres, along with other Turkish, Russian and Ukrainian authorities. Guterres signed the deal on behalf of the U.N.

Erdoğan, in his speech, expressed his gratitude to all those who contributed to making these deals possible, including Russia, Ukraine and the U.N., saying, “We are all feeling the right proud of this initiative in resolving the global food crisis.”

The deals came following intense diplomacy carried out by Türkiye’s defense and foreign ministers, Erdoğan said, noting that thanks to these agreements, a new lifeline from the Black Sea to the world markets has been opened.

“The execution of this plan will be controlled through the Joint Coordination Center to be established in Istanbul in the coming days. The support of the international community is of vital importance for the success of this plan,” he said.

Erdoğan also stressed his expectation that the agreement signed in Istanbul will revive hopes for ending the war in Ukraine, noting, “As we have been saying since the beginning of this conflict, the prolongation of this war will lead to continued economic losses and human casualties. It will not only hurt the warring sides and the regional countries but all the world even in the most remote corners.”

“There will be no losers of a just peace,” he said, expressing his hope that these agreements will be a turning point in ending the conflict.

The deals did not come easy and should be implemented thoroughly in order to avoid a food crisis, Guterres said, stressing the role Türkiye will play in the implementation of this humanitarian mission in the Black Sea.

Despite these deals, the war continues and people are being killed every day, the U.N. chief said, underscoring the need for a comprehensive peace deal to end this tragedy.

One of the most important aspects of the deals is the fact that the entire operation will be controlled through a coordination center to be established in Istanbul. It will host officials from Türkiye, Russia, Ukraine and the U.N. so that the process and the maritime safety of the vessels from and to Ukraine can be jointly monitored.

This center will also check the cargo of vessels on their way to the world markets and to the Ukrainian ports in Odesa, Pivdennyi and Chornomorsk. Russia was concerned that Ukraine-bound empty vessels could carry weapons and military equipment.

As the demining of these ports will take time, the parties agreed that the commercial vessels will be guided by the Ukrainian navy until they reach a secured corridor in the Black Sea. While these operations continue, the two warring sides will not attack each other.

“No transport escort by Russian ships and no presence of Russian representatives in our ports. In case of provocations, an immediate military response. All inspections of transport ships will be carried out by joint groups in Turkish waters in the event of such a need,” Mykhailo Podolyak, the head advisor of Ukrainian President Volodymyr Zelensky, said on Twitter.

The deal will be valid for 120 days but will be renewed automatically. This is needed for uninterrupted shipment of food and fertilizers to the world market which has been suffering from soaring prices due to the Ukrainian war.

In the first phase, Ukraine is planning to ship around 25 million tons of wheat to the world markets. The country is one of the largest wheat producers and is in a process of harvesting new products. Many countries in Africa depend on Ukrainian and Russian wheat to escape the shortage of food.

Russia also signed a separate memorandum of understanding with the U.N. and Türkiye so that its shipment of food and fertilizer can be exported without any problems stemming from the existing sanctions.

As a result of U.N. efforts, both the United States and the European Union provided assurances that there will be no sanctions on the companies and vessels transporting Russian products to the world markets. Banking and insurance procedures will also be exempted from the sanctions.

Russian President Vladimir Putin had said his country could export around 50 million tons of wheat until the end of this year.

The United States called on Russia to let out Ukrainian grain quickly and voiced hope that a Turkish-brokered deal was well-structured enough to monitor compliance.

“We fully expect the implementation of today’s arrangement to commence swiftly to prevent the world’s most vulnerable from sliding deeper into insecurity and malnutrition,” White House spokesman John Kirby told reporters.

Joint Coordination Center for the grain crisis inaugurated in Istanbul

The Joint Coordination Centre (JCC) established after Russia and Ukraine agreed to the Black Sea Grain Initiative brokered by Türkiye and United Nations auspices was officially inaugurated in Istanbul on July 27.

“The JCC will facilitate the implementation of the Black Sea Grain Initiative to establish a humanitarian maritime corridor to allow ships to export grain and related foodstuffs and fertilizers from Ukraine,” the UN Office for the Coordination of Humanitarian Affairs stated in the press release on July 27.

The center will monitor shipment

Since Russia’s offensive on Ukraine began in February, it is estimated that up to 25 million tons of grains and food supplies have been stuck in the ports of Ukraine, and 20 merchant ships are waiting to transport the products in question. As Russia and Ukraine produce approximately 30 percent of the World’s grain exports, the issue prompted a food crisis and concerns over famine in developing countries in addition to the growing food prices in the world leading to inflation.

In order to tackle the crisis Russia and Ukraine agreed on an UN-brokered grain initiative with Türkiye on July 22, which indicated an establishment of the JCC. An attack on the Ukraine port of Odesa just hours after the signatures cast a shadow on the future of the initiative however the officials at the inauguration underlined the will to tackle the problem.

“The JCC will enable the safe transportation, by merchant ships, of commercial foodstuffs and fertilizer from three key Ukrainian ports in the Black Sea: Odesa, Chornomorsk and Yuzhny. The center will focus on exporting bulk commercial grain and related food commodities only; ensure the on-site control and monitoring of cargo from Ukrainian ports; and report on shipments facilitated through the initiative”, the UN office indicated.

The center comprises 5 military and civilian representatives each from Ukraine, Russian Federation, Türkiye and the UN, Türkiye’s National Security Minister Hulusi Akar stated at the opening ceremony at Istanbul National Security University where the center will be located.

“This. It will technically track the journey of the ships through satellite, internet and other means of communication,” Akar said.

The minister added that the initiative started working following the signatures on July 22, and “loading processes of the ships that will leave the Ukrainian ports is ongoing.”

“If there is a need for demining, plans agreed by all parties would be made. However, there is no need at this stage,” he added.

Merchant ships were stranded in ports due to mines placed on Ukraine’s Black Sea coasts, Russian attacks and sanctions against Russia.

The first ship sales from Ukraine after grain deal 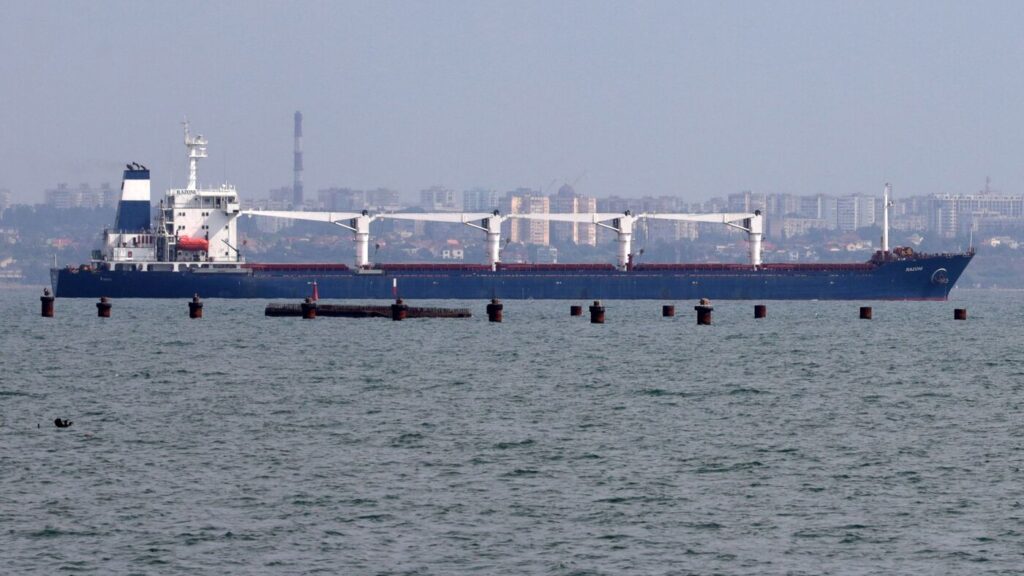 Bulk carrier M/V Razoni, carrying a cargo of 26,000 tonnes of corn, leaves Ukraines port of Odessa, en route to Tripoli in Lebanon, on August 1, 2022, amid Russia’s military invasion launched on Ukraine. – The first shipment of Ukrainian grain left the port of Odessa on August 1 under the under the Black Sea Grain Initiative deal signed in Istanbul, on 22 July, aimed at relieving a global food crisis following Russia’s invasion of its neighbour, the Turkish defence ministry said. (Photo by Oleksandr GIMANOV / AFP) (Photo by OLEKSANDR GIMANOV/AFP via Getty Images)

The cargo ship carrying 26 thousand tonnes of corn left Ukraine’s port of Odesa on Aug. 1 as the first shipment within the framework of the grain export deal signed under UN auspices and Türkiye’s guarantorship.

The shipment is the beginning of the grain and foodstuff shipments as Russia and Ukraine reached an agreement for the “Black Sea Initiative” under UN auspices and Türkiye’s facilitation on July 22.

The UN and Türkiye had been working on brokering a deal to solve the grain crisis as the ships stranded in Ukraine’s ports are believed to hold around 22 million tons of grains causing a global food crisis, affecting 50 million people.

The Ukrainian government stated that another 16 ships were awaiting departure, Financial Times reported.

The Razoni is expected to be in Istanbul tomorrow, the Türkiye’s National Defence Minister Hulusi Akar stated on Aug. 1.

“The other ships will depart without any problems. This is a completely humanitarian issue. People are waiting. The ship will be offshore of Bosphorus around 3:00 PM tomorrow. And the Joint Coordination Committee will monitor it after anchoring,” Akar said to state-run Anadolu Agency adding that it will leave for the port of Tripoli in Lebanon.

Ukraine is the world’s fifth-largest exporter of cereal and accounts for 80 per cent of Lebanon’s wheat imports and is a big supplier for countries including Somalia, Syria and Libya.

Turkiye-Syria Reconciliation : Will it be Possible?
1.130
0

Turkiye Rising Power in Africa: What are Turkiye’s expectations in Africa?
854
0
Diğer Galeriler

Why is Turkiye Popular for Medical Tourism?

Turkiye-Syria Reconciliation : Will it be Possible?

Turkiye Rising Power in Africa: What are Turkiye’s expectations in Africa?