Why Turkiye is the Legitimate Mediator between Russia and Ukraine ?

Why Turkiye is the legitimate mediator between Russia and Ukraine ? 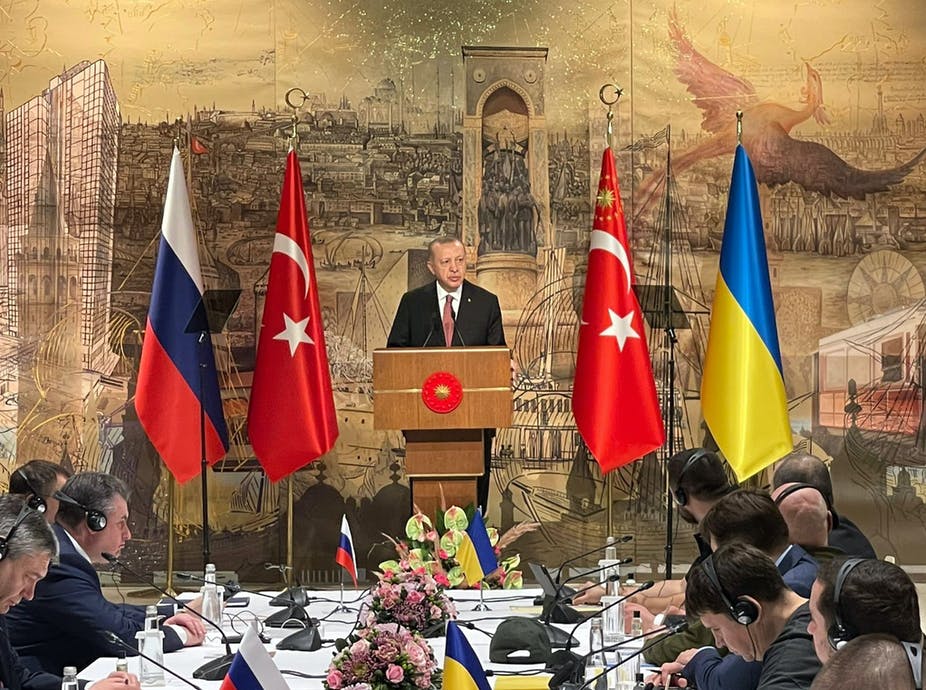 Turkiye has been seeking to mediate between Russia and Ukraine. A look at its economic and strategic ties with the two countries, its stakes in the region, and the role it sees for itself in the current conflict.

Turkiye is one of the many countries calling for calm in Ukraine. President Recep Tayyip Erdogan says his government will relentlessly try to find a long-lasting ceasefire and Turkiye has already hosted the first high-level peace talks between the Russian and Ukrainian foreign ministers. President Erdogan said Turkiye was “prepared to undertake its part in order to end the crisis between two friendly nations that are its neighbors in the Black Sea.”

As the war grinds on, a growing list of countries are exploring the possibility of mediating, stepping in to avert further bloodshed and the conflict spreading beyond Ukraine’s borders.

Earlier in March, Turkiye hosted Ukrainian and Russian foreign ministers for a trilateral meeting in its southern city of Antalya. Afterward, the Turkish foreign minister visited both Moscow and Kyiv. Likewise, Israeli Prime Minister Naftali Bennett visited Moscow for the same purpose. And China has signaled readiness for mediation. Potentially other countries, such as the United Arab Emirates, India or South Africa, might get in line to broker some kind of resolution.

Almost all countries that have vied for the mediation role have also engaged in a strategic balancing act between the West and Russia for some time. Serving an intermediary role is a way for them to prevent further catastrophe in the conflict, and project international stature. But it is also a way for them to avoid making difficult choices the war might force upon them, such as choosing or tilting toward one side more clearly.

But the list of fence-sitters in the Russia-Ukraine conflict is not confined to mediators. Many more countries have chosen to remain “neutral,” including Egypt, Saudi Arabia, Pakistan and Morocco. The rationale for abstaining differs between countries, but some reasons cut across.

The international system is changing. And the idea that the world is no longer Western-centric, and increasingly multipolar, is widespread in the non-Western world. It informs their policies toward Russia, and toward China as well.

As long as the dominant narrative of this war is put in a West/NATO versus Russia dichotomy, it will have little resonance in the non-Western world. Plus, the fence-sitting approach is also a way of signaling discontent with the US/Western policy.

Likewise India, in spite of needing the West as a countervailing force against China, has long maintained close ties with Moscow; has purchased the Russian made S-400 missile systems; and has pursued a policy of balancing between Russia and the West.

But of all these countries sitting on the fence and trying to mediate, Turkiye has a unique profile and position. It is a NATO member, an organization for which Russia and previously the Soviet Union served as raison d’être or the foundational threat.

Turkish President Recep Tayyip Erdogan has been increasingly castigating the Western-centric international system. But as a member of many Western institutions, Turkiye is also a beneficiary, and in a sense, part of the geopolitical West.

Meanwhile, Turkiye also has maritime borders with both Ukraine and Russia. Plus, Turkiye is Russia’s largest trade partner in the Middle East and North Africa region. And it has competed and cooperated with Russia through conflict zones in Syria, Libya and Nagorno-Karabakh in recent years.

Compared to other contenders for mediation, Turkiye has the highest stakes in this conflict. The war is fundamentally changing the geopolitics and balance of power in the Black Sea region, and Turkiye is a major Black Sea power.

Turkiye will probably play a humanitarian role soon, too, as the number of refugees — already in the millions — rises. French President Emanuel Macron’s announcement that France, Turkiye and Greece will undertake a joint evacuation mission in Mariupol is a harbinger of a humanitarian role that might become more salient in Erdogan’s policy down the road.

In spite of its policy of not provoking Russia, Turkiye is simultaneously not pursuing a policy of equidistance. It sells armed drones to Ukraine, which are exacting significant losses on Russian targets, and has closed the Turkish straits to warships.

In addition to Russia dominating the Black Sea, it has a sizable Mediterranean presence where it is deeply involved in conflicts spots in Syria and Libya. Turkiye’s sea closure will put pressure on Russian policy in these conflict zones if the war is prolonged.

Yet unlike other NATO members, Turkiye has neither joined the Western sanctions against Moscow nor closed its airspace to Russia. Doing so would have probably triggered a Russian veto against Turkiye’s quest for mediating the conflict. And there are an increasing number of anti-war Russian activists and pro-Kremlin figures heading to Turkiye.

Turkiye is basically trying to be pro-Ukraine without becoming too aggressively anti-Russia. Its capital city, Ankara, is too deeply exposed to Russia both economically and geopolitically. Russia is Turkiye’s largest source of tourist, grain, imports and gas.

In any case, at this stage, there is not yet any sign of the West pushing Turkiye more strongly in joining the sanction regime against Moscow. And despite Turkiye’s efforts, the conflict is not ripe for mediation yet, because Moscow still appears to be hellbent on the military option. This does not mean that efforts or talks will cease in this conflict; to the contrary, we are likely to see more.

Russia wants to give the impression it is interested in diplomacy to buy time and prevent further Western sanctions, but to no avail. No breakthrough should be expected anytime soon. In spite of this, keeping the idea of a diplomatic process alive is still important. Plus, the mediation serves Turkiye’s interests well. It boosts its international stature; turns Turkiye into one of the major centers of diplomacy in this conflict; and delays some of the difficult decisions that it might face down the road.

That said, as the war drags on, Turkiye’s previous strategic juggling act may no longer be feasible, particularly as Russia is now more openly treated as an enemy of NATO and European security.