TEN MONTHS TO THE ELECTIONS: SHAPING TURKEY’S DESTINY (ARE WE?)

The year 2023 is critical for Turkiye’s political history. Following the elections in June, the Republic of Turkiye will celebrate its 100th anniversary in October. Therefore, the 2023 elections will not only determine the government that will bear the burden of the economic crises, but also the government in the country at the 100th anniversary of the Republic. Now the end of the summer, the countdown to the historic elections has begun. As political parties are organizing their programs, the political wind is blowing stronger than ever.

Among the political parties, it can be said that the AK Party in particular has given 2023 a central place in its political program. 2023 was presented as the ultimate point of the government’s economic and strategic plans and turned into a propaganda tool with the slogan “Target 2023 (Hedef 2023)”. In this sense, at the end of 2012, the AK Party announced nearly 100 articles with political, economic and infrastructure objectives for the 100th anniversary of the Republic. Among the goals announced by the government ten years ago were to become one of the world’s top 10 largest economies, to raise per capita national income above 20,000 dollars, to reduce inflation to 16.2% and unemployment to 5%.

Ten months before the elections, it is safe to say that the AK Party has fallen well short of its 2023 targets.

Undoubtedly, the main indicator that the AK Party’s 2023 goals have not been achieved is the deepening economic crisis in Turkiye. According to data released by TurkStat, inflation in August was 80.21%.

In addition, unemployment stood at 10.1% and the current account deficit rose to $4.01 billion in July. In addition to the economic crisis, society’s trust in public institutions and organizations in Turkiye is also decreasing. Compared to January 2022 data, we see that public trust in institutions such as the Turkish Parliament, the current government and the Central Bank has declined.

Which of the statements about the 2023 elections would you agree with? 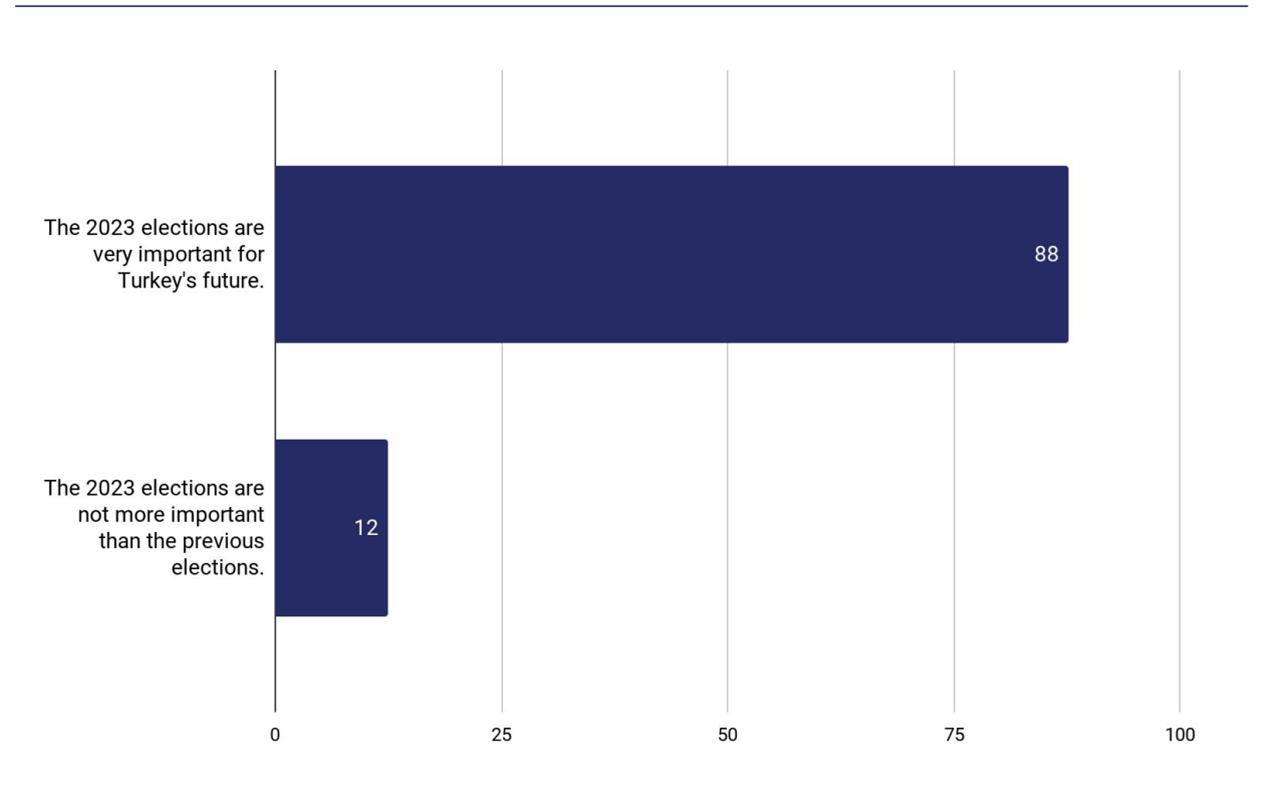 Turkiye will celebrate the centenary of the Republic in 2023. General elections are expected to be held a few months before the anniversary of the Republic. In Turkiye, where the AK Party has been in power for 20 years, elections are scheduled to take place latest in June 2023. While some consider the upcoming elections to be of great importance for Turkiye’s political history, others believe that they are no more important than previous elections.

When asked about the public’s views on the issue, vast majority (88%) stated that the 2023 elections are very important for Turkey’s future. Another 12% think that the upcoming elections are no more important than the previous elections.

Which of the statements about the 2023 elections would you agree with?

An overwhelming majority of over 85% across all gender and age groups agree that the 2023 elections are very important for Turkey’s future. When we analyze the responses in terms of gender groups, we do not observe a significant difference between the groups. On the other hand, the rate of male respondents who think that the 2023 elections are not more important than the previous ones is 3 points higher than of female’s.

What Should Turkey Do in Case of a War Between Russia and Ukraine?(%) (Public-opinion poll)
By Türkiye Raporu March 2022   58% of our participants...
BİR YORUM YAZIN

Editor’s Note: Turkiye at the Heart of Global Disorder Challenges
1.477