The D-8 Organization for Economic Cooperation : A Strategy to Boost

The D-8 Organization for Economic Cooperation : A strategy to boost

The D-8 Organization for Economic Cooperation, also known as Developing-8, is celebrating its 25th year.

The idea of an organization among major Muslim developing nations was put forward in 1996 by Türkiye’s former Prime Minister Necmettin Erbakan. Its official establishment was announced at the Istanbul Declaration of Summit of Heads of State/Government on June 15, 1997.

Comprising eight Muslim countries, led by Türkiye, D-8 is a global formation, rather than a regional one, with its principles, the scope of geographical area, and the combined population of over 1 billion.

The total population of its member states is around 1.2 billion, while its combined economic size is approximately $4 trillion, covering an aggregate area of 7.5 million square meters (80.7 million square feet).

D-8 is an organization for development cooperation among its member states, which spans from southeast Asia to Africa, and consisting of Bangladesh, Egypt, Indonesia, Iran, Malaysia, Nigeria, Pakistan, and Türkiye.

The organization aims to improve member states’ position in the global economy, diversify and create new opportunities in trade relations, enhance participation in decision-making at international level, and improve standards of living, according to D-8.

The D-8 Secretariat, in partnership with the Union of Chambers and Commodity Exchanges of Türkiye (TOBB), will organize a D-8 Investment Forum in Istanbul to present investment opportunities available in member countries. 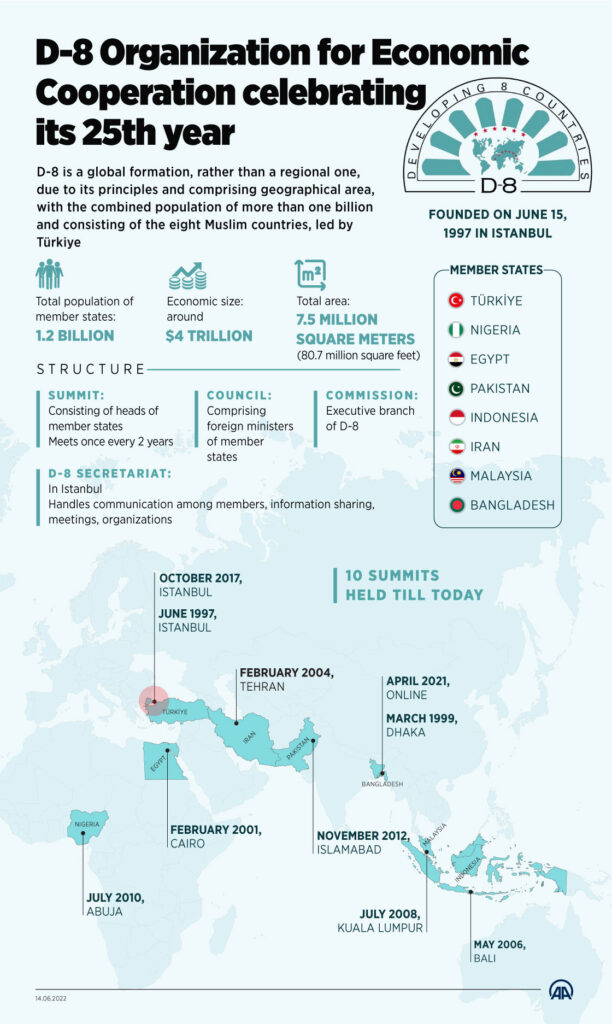 The beginning of the interactions between geographical discoveries and civilizations at a global level have brought about a deepening of mutual relations in political, social and cultural issues especially in the economy. The phenomenon of
globalization, which entered the first phase of capitalism with the overseas expansion, has passed through various phases as a result of historical breaking points. Although the industrial revolution is one of the breaking points in question, the relations of production have changed radically and industrialized countries like England have added their economic power to their political power.

With the development of communication and transportation technologies in the global economic policy in the 1970s, the shift towards private companies made multinational companies important actors in global politics and an intricate relationship was established between nation-state, multinational companies and regional economic organizations. States, which are the main determining actors of the system according to realism, started to share their authorities with regional
and cross-border organizations. This situation pointed to another breaking point where globalization gained momentum.

The stage in which globalization manifested itself was the end of the Cold War period, which entered the period of collapse with the fall of the Berlin Wall, and the main strength of the system in this direction was the USA. The countries that have gained their independence from the Soviet Union and the states that are on the way to become regional powers have sought new quests to gain their political and economic powers by taking advantage of the authority gap. In this regard, integration into the Western world led by the USA after the Cold War has become the main political and economic goal of most countries and organizations, and the view that economic power depends on the relations with the West has become a definite acceptance.

But one of these exceptions “Developing Eight Organization for Economic Cooperation” or the D-8, in short, was the organization towards the goal of political and economic power that can be provided outside of the West, was established
under Turkey’s leadership. The D-8 organization is a global economic organization with regional potential, formed by 8 Islamic countries coming together, independent of the conjuncture of the pre-21st century period. Although the studies on D-8 are inadequate in the literature, there are claims that D-8 does not have a major impact compared to other economic organizations that can be compared. With this study, the structure, functioning and potential of the D-8 organization since its establishment will be examined and the gap in the literature will be tried to be eliminated. Besides, the domain of the organization will be revealed from a holistic perspective.

States began to pursue a more liberal foreign policy after the restriction that the Cold War period brought to the foreign policies of Islamic countries disappeared after 1991. The D-8 organization is the result of this freedom and out-of-western
quests.

D-8, also known as ”Developing Eight Organization for Economic Cooperation” is an organization that the prime minister Necmettin Erbakan in Turkey was founded in leadership. June 15, 1997, the meeting held in Istanbul State and adopted the Istanbul Declaration of Heads of Government Summit and Turkey, Iran, Pakistan, Bangladesh, Malaysia, Indonesia, Egypt and Nigeria, the D-8 has brought the challenge .

Necmettin Erbakan, the pioneer in the establishment of the organization, stated that at the end of the 20th century, the D-8 was established with the aim of peace and prosperity in the world and a new world should be created on the ground of
peace (BIK, 2017). It is possible to state that the D-8 movement set out with a peaceful and developed world goal in this sense.

Developing-8 (D-8), which was originally called “Muslim Eights” to refer to eight Islamic countries at first, but this conceptualization would not match the universal characteristics of domestic political reactions and economic integration
(D- 8) was changed as.

There are great similarities between the countries that make up the D-8. The organizer; Turkey, Pakistan, Iran, Egypt, Indonesia, Malaysia, Nigeria and Bangladesh, the economic and military power in the Islamic countries are populous
and medium-sized. Turkey D-8 initiative to Asia and Africa can be regarded as a correct expansion project. For example, in Indonesia and Malaysia, East Asia, Egypt and Nigeria are not considered as an important base in Africa, near Turkey’s continental basin contains policies to address a lack of important elements. In addition, the fact that member countries have a population close to one-fifth of the human population and possess an extremely important geostrategic belt constitutes an important position in terms of the potential of this project.

The main purpose of the D-8 initiative is to organize a potential economy among 8 countries that represent rich resources, large population and geographic area.

In this context, it was aimed to create new opportunities in commercial relations, to increase participation in the decision making process at the international level, to provide better living conditions, to develop economic cooperation around
concrete joint projects and to strengthen the status of developing countries in the world economy.

Economy, trade, communication, information, finance-banking, agriculture, energy, tourism, culture, technology, etc. are some of these concrete projects that is aimed to be created in the fields . In addition, it is aimed to carry out projects such as carrying out a teamwork to fight poverty, establishing an information network between countries, opening Islamic banks,
and cooperating for the development of aquaculture .

When we look at the geographical distribution of the countries that are members of D-8, it can be stated that the organization looks like a global structuring rather than a regional one. D-8 is open to all developing countries, provided that it adheres to the organization’s goals and principles.

The 6 big stars on the flag of D-8 draw attention to the motto of the organization and express its basic principles. These principles are:

Therefore, it is possible to express the existential goals of the D-8 organization in the form of peace and dialogue, with the help of justice and cooperation, to eliminate the foreign trade deficits of the member countries, to identify deficiencies, to increase their level of development and to assist the development of poor countries . In addition, the development
of human resources through education and fighting poverty in this direction constitutes one of the main objectives of the organization, since the majority of the people of the D-8 countries are at low level in terms of income level.

The main organs of D-8 are Summit, Council, Commission and Secretariat.

• Summit: It is the top organ of the D-8. It consists of the Heads of State / Government of the member states. Meetings are held every two years.
• Council: Consists of the Foreign Ministers of the member states. It is the political decision-making body of D-8 and acts as a forum for a comprehensive evaluation of existing issues.
• Commission: It is the executive body of D-8. It consists of senior officials appointed by the relevant governments. Each Commissioner is responsible for national coordination in his country .
• Secretariat: The Secretariat aim is to ensure coordination between the member countries. The established secretariat is located in Istanbul Mecidiyeköy .

One of the factors influencing the establishment of D-8 was the slow functioning of the decision-making mechanism of the Organization of Islamic Cooperation (OIC). Although it Works with 57 members OIC is a structure where all Islamic
countries are together, it is insufficient. D-8, which was established with the aim of rapid decision making and increasing the development levels of Islamic countries, has a similar appearance to the slow functioning of the Islamic Cooperation Organization and cannot use its potential . In addition, the political aspect of the D-8 organization remains weak. Although the geographical distance of member countries to this situation is effective, the main factor is that members are also members of different regional and international organizations and try to solve most of their problems through these organizations

The activities of D-8 are organized by various meetings, especially the summit.

In these meetings, while policies are established with the aims and objectives of D-8, cooperation issues are tried to be determined on the other hand. Cooperation within the scope of D-8 is carried out mainly on a sectoral basis, the sector of each country continues in a certain way in advance:

However, countries can carry out studies in areas other than their sectors, and flexibility is left in this regard. In 2008, various cooperation topics were gathered under five general headings and identified as the main cooperation areas of
the organization. These; trade, transportation, industry, agriculture and food security, energy and mines.

D-8 Secretary-General Ambassador Dato Ku Jaafar Ku Shaari emphasized the 5 main areas of cooperation with his statement: “A trading system that will ensure the establishment of a better trade should come to the agenda. We are carrying
out our work with our own currencies, where the trade will take place, joint studies will be carried out, our technological studies will be made and we will be less dependent on other countries.”  Therefore, in an environment where countries can trade with their currencies and realize joint technology breakthroughs, it is pointed out that foreign dependency may decrease in terms of other sectors.

The most important advantage of D-8 countries is that the states that make up the organization have no major problems with the West. Iran has a seamless relationship with the USA, especially Canada, Australia, England and EU countries (Hasgüler and Uludağ, 2014, p.430-431). Therefore, there is no obstacle for D-8 to cooperate with the West. All D-8 countries are also members of the Organization of Islamic Cooperation At the United Nations General Assembly, the D-8 organization was granted “Observer Status” with the draft resolution adopted on 10 December 2014 .

The D-8 Global Vision was approved during the 8th Summit at Islamabad on November 22, 2012. Its salient features are summarized below: