Cost of Living Crisis : We can’t Afford to Make Living

Cost of Living Crisis : We can’t Afford to Make Living

The cost of living in Turkey continues to make its impact felt more and more with each passing day, with the overlap in
food products and gasoline prices.

However, high inflation and high cost of living are not the only problems Turkey is facing. With the decrease of the effect of
the pandemic and the occupation of Ukraine by Russia, it is possible to see the negative effects of inflation in all
world markets. To deal with inflation, the US Federal Reserve (FED) increased interest rates by 50 basis points. Thus,
the FED made the highest rate hike since the 2000s. (The last time the bank increased interest rates by 50 basis points was 22 years ago.) In May, the inflation rate in the USA broke a record with 8.5%, the highest level of the last 40 years. The situation is no different in the UK. Inflation, which was 9% in May, reached its highest level in the last thirty years in the country.

Inflation in Turkey is at its highest level in the last twenty years. TURKSTAT announced that annual inflation was
realized as 69.97% in April. A year ago, in April 2021, inflation was 17.14% on an annual basis. On the other hand, it should be underlined that the worsening of the economic situation in Turkey is not a new phenomenon. The currency crisis
has actually begun in 2018.

In our second report in April, we asked our respondents what they considered to be the biggest reason for the price hikes.
The majority of the respondents (60%) answered “the government’s economic policies”, while 24% attributed the
deterioration in the economy to the “increase in prices after the pandemic in world markets”.

In fact, the economic crisis in Turkey can be traced back to 2017, three years before the pandemic. An article published in the New York Times underlines that in the 2000s, Erdoğan favoured his close associates with international financing for mega
construction projects. According to the article, in 2017, Turkey’s defaulting debts worried investors and caused a massive
depreciation of the Turkish lira.

Which of the following statements would you agree with? (%) 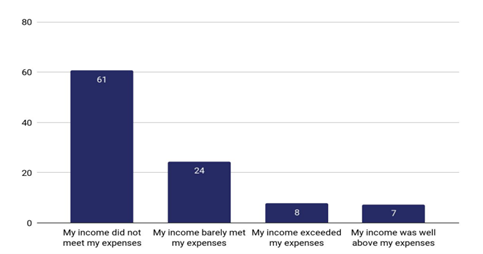 When we consider the answers given to these two statements, it is possible to say that 85% of the participants are having financial difficulties.

When we look at the educational attainment of the respondents, those who stated that their incomes do not meet their expenses are led by middle school graduates with 72.3%, followed by those with primary school education and below with 67.4%.

Compared to March, there is a significant increase in those whose income does not meet their expenses in lower education groups.

Public Opinion Poll : Current and Future State of the Economy in Turkey
By Türkiye Raporu March 2022   We continue to follow...

What Should Turkey Do in Case of a War Between Russia and Ukraine?(%) (Public-opinion poll)
By Türkiye Raporu March 2022   58% of our participants...
BİR YORUM YAZIN

Editor’s Note: Turkiye at the Heart of Global Disorder Challenges
1.575