Rising Tension Between Greece and Turkiye The tension between Turkey and Greece is likely to remain on the agenda as long as the problems remain unresolved. It would be appropriate to say that the roots of this tension lie in the Cyprus Issue between Turkey and Greece and the 12-mile/islands issue in the Aegean Sea. The Cyprus Crisis dates back to the last days of the Ottoman Empire. The island was leased to the United Kingdom for 50 years in 1878 during the reign of Sultan Abdülhamid II.

The issue began in 1920 when the Greeks wanted to be connected to Greece. Although this struggle of the Greeks, which continued until the end of the 1950s, ceased with the establishment of the Republic of Cyprus in 1960, it was not over and the Greeks continued to commit massacres against the Turks in Cyprus until the Cyprus Operation was carried out. As a result, the Republic of Cyprus, which we call the Greek Administration of Southern Cyprus, joined the European Union in 2004. In addition, with the Annan Plan made by Kofi Annan, the UN Secretary-General at the time, it was brought to the agenda in 2004 to unite the island and become a federative United Republic of Cyprus. However, as a result of the referendum held, the plan was refused by the “No” result from the Greek Cypriot side, although the “Yes” vote was in the majority from the Turkish side. Although various negotiations have been held since then, the problem has still not been resolved. The Aegean Sea Issue, which was the cause of last month’s tension, is another problem that has not been resolved despite the Treaty of Lausanne.

According to the Treaty of Lausanne, the maritime boundary between Turkey and Greece should be 3 miles, however, Greece unilaterally increased this limit to 6 miles in 1936. With Turkey’s recognising the move, Athens started to claim that the territorial sea limit was 12 miles.

In addition, although Turkey agreed to include the 12 islands in the Eastern Aegean within Greece’s borders, the two countries agreed not to arm the islands. Nevertheless, Greece insisted on arming the islands. As a result, it is safe to say that Greece is in violation of both the Lausanne and Paris Treaties. These two crises peaked with the Cyprus Operation on 20 July 1974 and the Kardak Crisis in late 1995. Although the two countries came to the point of going to war, the crises were limited to diplomatic rather than military level.

Despite all this, since both countries are NATO members, the likelihood of the feared war is lower than one might think. In the light of the tension that has been on the agenda again in recent weeks, we, asked the society which policy should be followed regarding the crisis between two neighbours. 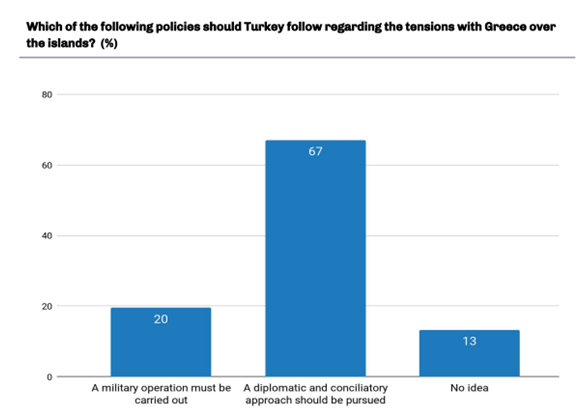 Tweetle
YAZARIN SON YAZILARI
Cost of Living Crisis : We can’t Afford to Make Living
28 Haziran 2022
Rising Tension Between NATO and Turkiye ( Public Opinion Poll %)
28 Haziran 2022
If there was a general election this Sunday, which party would you vote for? (%)
3 Ekim 2022
EU signs deal to double gas imports from Azerbaijan by 2027
1 Ağustos 2022
Türkiye-Iran-Russia Trilateral Summit : What was discussed?
2 Ağustos 2022
Which Country Should Turkiye Align With?
16 Mart 2022
BİR YORUM YAZIN