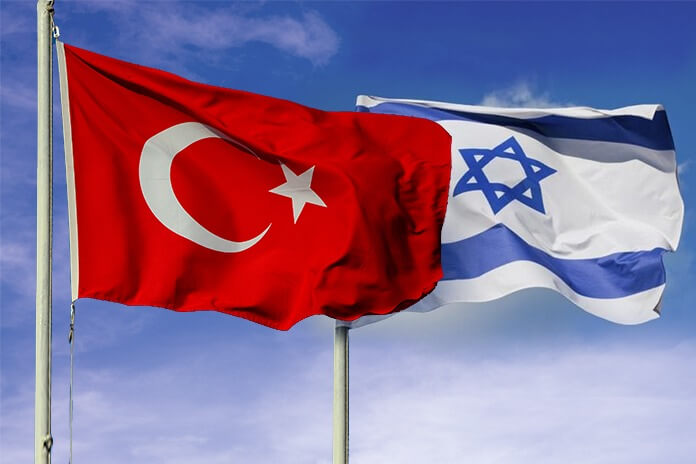 Turkiye and Israel agreed on August 17 to restore diplomatic relations to the highest level. With this decision, diplomatic relations between Ankara and Tel Aviv were raised to the level of ambassador after a four-year hiatus. This development marks the beginning of a new era in Turkey-Israel relations, which have been characterized by crises for years.

Following the agreement, on September 19, the Israeli Foreign Ministry’s Appointments Committee decided to appoint Irit Lilian as ambassador to Ankara, while Şakir Özkan Torunlar was appointed as Turkey’s ambassador to Israel on October 6. Foreign Minister Mevlüt Çavuşoğlu made important statements regarding the improvement of relations with Israel. ” Following the new government taking office, a dialog process with Israel had begun.(…) The reappointment of ambassadors is also important in terms of improving bilateral relations. On the other hand, as we have always said, we will continue to defend the rights of Palestine, Jerusalem and Gaza.”

It is possible to say that the relations between the two countries have warmed since the beginning of this year. In January 2022, President Erdoğan stated that his Israeli counterpart Herzog could visit Turkiye in March.

Given that an Israeli leader has not visited Turkiye since 2007, the significance of this statement becomes even clearer. Herzog’s arrival in Ankara on March 9 marked the first visit between the two countries in fifteen years. However, the Arab press harshly criticized Herzog’s warm welcome in Turkey.

In contrast to today’s ties, relations between Turkiye and Israel deteriorated sharply during the Peres and Netanyahu administrations. In 2009, then Prime Minister Erdogan, at the Davos Summit, referring to the crimes against humanity in Palestine, addressed then Israeli President Peres: “You know well how to kill. I know very well how you kill children on the beaches, how you shoot them.” Relations between the two countries reached a breaking point in May 2010 when the Israeli Defense Forces intervened in international waters against 6 ships carrying humanitarian aid to Gaza, organized by the IHH Humanitarian Relief Foundation and the Free Gaza Movement. 10 passengers on board of the Mavi Marmara, which had 800 passengers, were killed by Israeli commandos. In light of these developments, in the first report of October, we asked respondents how they evaluate the improvement in Turkey-Israel relations.

After a long time, the Israeli ambassador was appointed to Turkey. Which of the following statements reflects your views on improving relations with Israel in foreign policy? 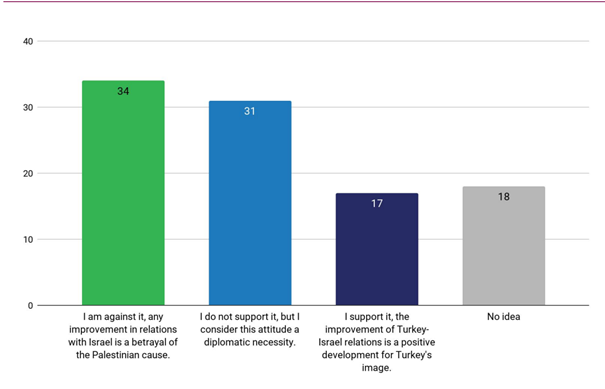 The rate of those who support improved relations with Israel and see it as positive for Turkey’s international image is 17%. 18% of the respondents did not express an opinion on the issue.

After a long time, the Israeli ambassador was appointed to Turkey. Which of the following statements reflects your views on improving relations with Israel in foreign policy? 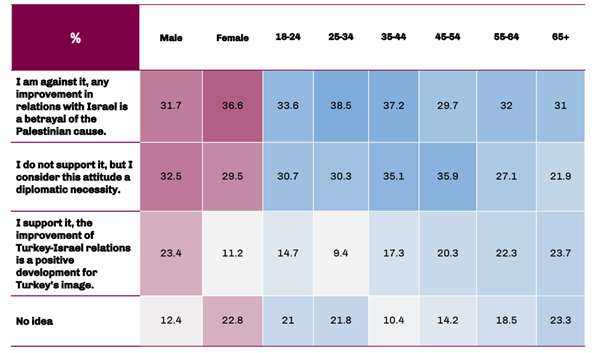 The majority of female respondents, 37%, interpret these developments as a betrayal of Palestine.

Majorities in all age groups except the 45-54 age group interpret the developments as a betrayal of the
Palestinian cause. However, the rates are close to each other.

The 25-34 age group was the group with the largest majority (39%) of respondents who answered the developments as “betrayal of Palestine”.

The majority of the  45-54 age group (36%) responded “I do not support the developments, but I think that this attitude is a requirement of diplomacy”.

ÖNCEKİ KONU
Editor’s Note “The World in Peril and Paralysed’ by N.Selin SENOCAK
SONRAKİ KONU
Who Can Improve the Economy in Turkiye?
Tweetle
admin

Editor’s Note: 2023, “Century of Turkiye” Marred by the Turmoil of the Upcoming Presidential Election
By N.Selin ŞENOCAK  ANATOLIA REPORT January 2023 There are...