Rising Inflation, Falling Real Wages: What is to be done?

Rising Inflation, Falling Real Wages: What is to be done?

“We will triumphantly conclude our struggle for economic stability, in which we are trapped in the evil triangle of currency, inflation and interest rates.

We are determined to protect our citizens against high inflation.” President Recep Tayyip Erdoğan made these statements at the graduation ceremony of Ibn Haldun University in Istanbul on 24 July regarding the economic crisis that deeply affected the society. The extent to which the recent economic policies are sufficient to control inflation and the rise in exchange rates remains a matter of debate.

According to TURKSTAT data, the annual increase in CPI was 78.62% in June. The monthly increase in inflation was 4.95 per cent. In light of the recent developments, it is possible to say that the government has avoided pursuing policies such as interest rate hikes that would prevent the increase in inflation in order to increase the purchasing power of the society. The government is mostly trying to increase the purchasing power by providing social aid packages and increasing salaries. Despite the rise in inflation, the Central Bank of the Republic of Turkiye (CBRT) announced that it kept the policy rate unchanged at 14% following the Monetary Policy Committee meeting held on 21 July. Additionally, the Minimum Wage Determination Commission unanimously decided on the increase in the minimum wage by consensus only after two meetings. As of 1st July, the minimum wage valid was determined as net 5 500 TL.

On the other hand, the Ministry of Family and Social Affairs is preparing social assistance packages that are intended to relieve the society economically. In this framework, the government has expanded the scope of social assistance. Working and retired people were also included in the scope of the Family Support Programme. In addition to the general conditions, private sector employees, tradesmen, artisans, SSK retirees, BAGKUR and Retirement Fund retirees and their “widows” and “orphans” will also be able to benefit from the Family Support Programme of Turkiye, on condition that the income per person in the household is less than one third of the net minimum wage.

On the other hand, we can see that other countries and institutions struggling with high inflation are pursuing different policies in addition to social assistance packages. For example, on 21 July, the European Central Bank (ECB) raised its policy rate by 50 basis points to 0.5%. With this decision, the bank raised interest rates for the first time in 11 years. The ECB had raised interest rates for the last time in 2011 and interest rates had been at negative levels since 2014. The cost of living and high inflation in Europe have a great impact on this decision taken by the ECB. As of June, inflation had reached double digits in 15 of the 27 EU member states. So, which policy does the society think should be pursued to increase purchasing power? As Türkiye Raporu, we analysed this issue in the second report of July. 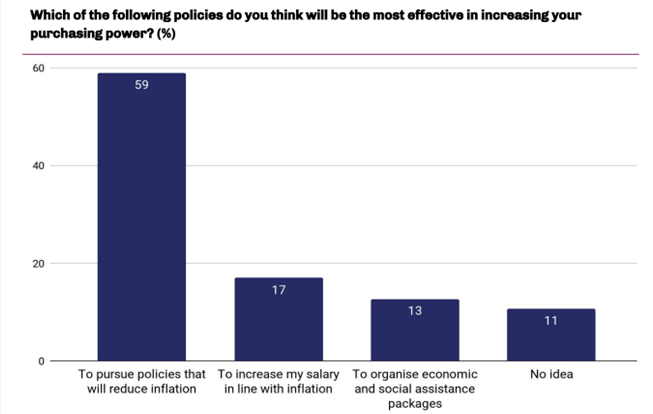 The majority of the society (59%) think that the policy that will be most effective in increasing purchasing power in the current economic crisis is ‘’pursuing policies that will reduce inflation ”. The second most preferred policy proposal with 17% is “increasing my salary in line with inflation”. However, 13% think that the most effective policy that will increase their purchasing power is organizing economic and social assistance packages 11% of the society states that they do not have an opinion on the subject. 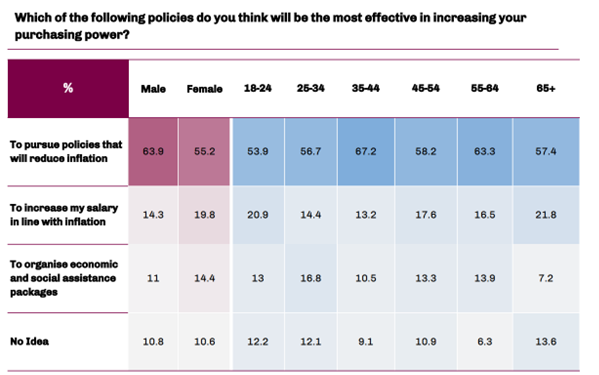 In all gender and age groups, the majority of respondents think that policies to reduce inflation should be pursued. On the other hand, this rate is 9 points higher among male respondents compared to female respondents.

While one in every five female respondents think that the most effective method to increase purchasing power is inflation hikes in salaries, this rate is 14% among male respondents.

In terms of age groups, we observe that the rate of respondents in the youngest age group who agree with the view of “pursuing policies to reduce inflation” is the lowest with 54% compared to other groups. A significant 21% of the respondents in this age group think that an inflation increase in salaries would be the most effective policy.