If the following candidates qualify for the second round of presidential elections, who will you vote for? 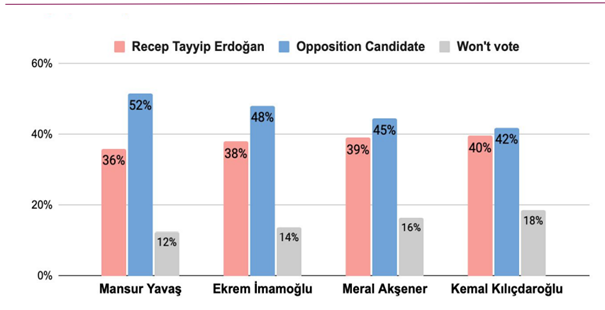 In February, perhaps the most memorable picture for most of us from the opposition wing was the photograph of six opposition leaders gathered under the umbrella of the Nation Alliance, sitting at the same table. In this meeting, which lasted more than five hours, the main topic was the details of the strengthened parliamentary system. In the joint statement, it was stated that the common goal of the six parties represented by the leaders gathered around the same table is the construction of a democratic Turkey where “fundamental rights and freedoms are guaranteed”. This meeting, which took place upon the invitation of Kemal Kılıçdaroğlu, brought up the debates on who will be the common candidate of the opposition. Kılıçdaroğlu, in a television program he attended, stated that he would be proud to be a joint candidate if the alliance accepts it. Kılıçdaroğlu’s clear statement of his will for candidacy strengthened the claims that the candidate would be Kılıçdaroğlu. As Türkiye Raporu, we periodically discuss the first and second round scenarios of the Presidential elections. In our recent survey, we asked our participants which candidate they would vote for in the second round of the Presidential election.

According to our results, it is seen that all possible Nation Alliance candidates, namely Mansur Yavaş, Ekrem İmamoğlu, Meral Akşener and Kılıçdaroğlu, will win the election against President Erdoğan. However, support for these names is also at different levels. For example, in the scenario where Yavaş is a joint candidate, Yavaş is 16 points ahead of Erdoğan. In Kılıçdaroğlu’s candidacy scenario, the vote rates seem very close. In this sense, the results indicate that the strongest opposition candidate is Mansur Yavaş.

If Meral Akşener qualifies for the second round, 92% of the İYİ Party voters and 87% of the CHP voters say that they will vote for Akşener. When it comes to HDP voters, this rate drops to 59%. MHP voters are hesitant to vote for Erdoğan: MHP voters who do not want to vote for Erdoğan will have a choice between voting for the opposition candidate or not, depending on the name they choose as the opposition presidential candidate. 31% of MHP voters say that they will vote for Meral Akşener if she gets to the second round, which makes Akşener the second person who can get the most votes from MHP voters.

Akşener is victorious against Erdoğan in all age groups, except those aged 35-54. According to the age breakdown, Akşener received the most support from participants over the age of 65, receiving 56% of the votes from this age group.

If Ekrem İmamoğlu makes it to the second round, it is predicted that he will receive 89% of the votes from the CHP voters, and 85% from the voters of the İYİ Party and HDP. Ekrem İmamoğlu stands out as the person who received the most votes from HDP voters with 85%. On the other hand, 26% of MHP voters say they will vote for Ekrem İmamoğlu. According to the age breakdown, the group over 65 gives the greatest support to İmamoğlu. 61% of this age group state that they will support İmamoğlu. When we look at the votes given by the young people between the ages of 18-24, we see that İmamoğlu has the highest vote rate after Mansur Yavaş.