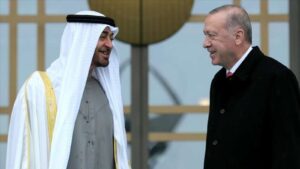 The tension between Turkiye and the United Arab Emirates since the Arab Spring has started to give way to a diplomatic “Second Spring” these days. The visit of President Erdogan the 14th of February 2022 and the hosting of Sheikh Tahnoun bin Zayed Al Nahyan in Turkiye in November 2021 are important steps at this point.

It is obvious that AKP, which has been following an unbalanced policy in foreign policy for a long time, has been trying to determine new coordinates in foreign policy since the US elections. Because the USA does not want to leave behind conflicting allies as it moves to a position where it gives more role to its proxies in the Middle East. While this situation forces the AKP, which was left alone in foreign policy, to a “U-turn” on the one hand, it also becomes a “glitter of hope” in the financing needed to extend its rule. It has been talked about for a long time that the AKP could no longer continue its playmaker role in foreign policy. The presence of Sedat Peker in the UAE seems to be another factor for Turkiye to take these steps more urgently.

Turkiye’s foreign trade volume dropped from $15 billion since 2017 to $7 billion in 2018. The continuation of tensions with the UAE is another point that needs to be compensated for when economic indicators are taken into account. Abu Dhabi’s launch of daily flights is a positive development for Turkish capital. In addition, Turkiye’s low-profile stance Egypt’s confrontation with regarding the Brotherhood in the new period, and the fact that the UAE also announced that it will cut its aid to the radical Islamist movement Fetullah Gulen, which it has been funding for a long time, as of December 2021, strengthens the view that relations are towards normalization.

The normal course of relations between Turkiye and the UAE rapidly deteriorated when Turkiye assumed the patronage of the Brotherhood in 2013. Because the Brotherhood was a special danger for the UAE, as well as seriously disturbing the Gulf countries except Qatar.

In the 1970s, the relationship between the Ikhwan organization and the Emirate, which closed the cadre of the UAE both in the field of education and in the government, opened up in parallel with the effect of the Islamic Revolution in Iran at the end of the 70s. As the political demands of the Brotherhood, which found a wide area of ​​influence under the influence of the Islamic Revolution, increased, the ministries were taken from them as part of the measures to reduce its weight in the state.

In the early 2000s, a serious political struggle was waged against the Ikhwan organization throughout the country, and after the Arab Spring, 94 people alleged to be the leader of the organization were arrested in 2013 and Ikhwan was declared a terrorist organization in 2014. While trying to reshape the Middle East, sponsoring this organization, which assumed the role of coach in the Arab Spring, cost the AKP more than it thought. The shrinking trade with the UAE along with the economic boycott of Saudi Arabia and the USA’s listing of the Brotherhood as terrorist organizations ultimately led to a serious failure and the AKP’s isolation in foreign policy.

The Biden administration’s “A Calm Middle East” policy paved the way for Saudi-Qatar relations, and Turkiye’s rapprochement with Egypt; There were two other important developments that led Turkiye to revise its relations with the UAE, one of the most strategic country in the region. In addition, while the UAE government announced that it will realize 50 major projects in and out of the country this year, it has become a luxury for the AKP, which is economically stuck, to continue adventurous in its relations with the UAE. Adding to this, the fear of isolating its allies (the UAE and other collaborators seeking space in the Middle East) in the Middle East, where the US is trying to conduct a more indirect diplomacy, the conditions for the easing of tensions were well established.

Today, Ankara and Abu Dhabi seem to be mending relations as both leaders promise increased regional cooperation. The two countries signed 13 agreements including on defence, trade, climate change, industry and the economy.

A new era of cooperation eases the tensions of the past to make room to hope for an intensive regional economic development.

Public Opinion Poll : Current and Future State of the Economy in Turkey
By Türkiye Raporu March 2022   We continue to follow...