What Should Turkey Do in Case of a War Between Russia and Ukraine?(%) (Public-opinion poll) 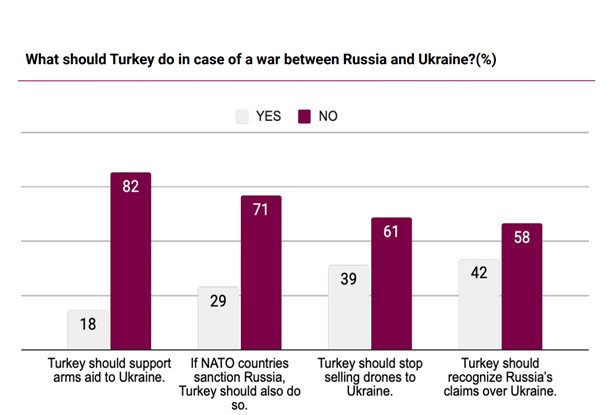 58% of our participants argued that Turkey should not recognize Russia’s rights over Ukraine was not approved. 82% of our participants are against providing weapons aid to Ukraine, and 71% are against Turkey’s participation in these sanctions if NATO imposes economic sanctions. In other words, the public is of the opinion that Turkey should not confront Russia. However, 61% of our respondents think that there is no need to stop selling Armed Unmanned Aerial Vehicles (SİHA) to Ukraine. The public wants a policy that will enable Turkey to get out of the Russia-Ukraine crisis with the least damage, but it doesn’t seem like it will be easy.

Majority in every group does not support the recognition of Russia’s claims over Ukraine. Consequently the official stance of the Turkish government is in line with this. These results show that majority of Turkish people do not find Putin’s claims convincing. Education breakdown shows that participants with the lowest and highest level of education have the highest opposition to this statement. Overall majority in all education groups oppose the recognition of Russia’s claims over Ukraine.