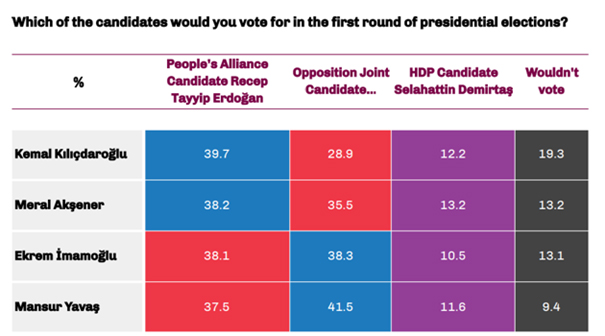 If an election were to be held this Sunday, President Recep Tayyip Erdoğan’s vote rate would seem to be between 37.5% and 40%. The voting rates of possible opponents of Recep Tayyip Erdoğan, on the other hand, vary within a wider range. In cases where they are rivals to Erdoğan, Kemal Kılıçdaroğlu has the lowest votes and Mansur Yavaş has the highest votes. Mansur Yavaş is the candidate who beats Recep Tayyip Erdoğan the most, while Ekrem İmamoğlu draws with Erdoğan. If party leaders run for president instead of mayors, they both lose. Those who say they will not vote when it comes to Kemal Kılıçdaroğlu’s candidacy reach the highest rate. This rate drops below 10% only in the candidacy of Mansur Yavaş. Compared to other candidates, Mansur Yavaş is likely to receive more votes from the right. While HDP’s votes increase when party leaders are candidates, it decreases when mayors are candidates. While Meral Akşener was the opposition candidate who received the fewest votes from HDP voters, Ekrem İmamoğlu received the most votes.

Political Party Leader Success in Turkey
How successful do you find the following politicians on a...
BİR YORUM YAZIN