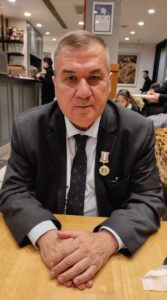 NATO focused on the Iraq War and the membership of former eastern bloc countries when Former Russian Defence Minister Sergei Ivanov said during the NATO Summit in Istanbul in 2004 that, if the alliance continued to expand towards its borders, they would have to consider it “Casus Belli”.

For the quarter century following the collapse of the Soviet Union, continental Europe experienced a period of geopolitical vacuum. For some, this was the ‘End of History’ or the final victory of the unipolar world. The disintegration of Yugoslavia, the NATO and EU memberships of the Eastern Bloc countries, 9/11, the invasion of Iraq and the colour revolutions cloaked the frozen conflicts, especially in eastern Europe. However, in most conflict areas, no final peace was made and the situation was managed with long-term ceasefires. The accession of Crimea into Russia brought the end of this historical interim period. The De Facto structure established in eastern Ukraine and a possible Ukraine war today may break Transatlantic ties together with the fragile status quo established after the Soviet Union. Because the dominant powers of continental Europe, Germany and France, are aware of what a war that will start in Ukraine will cost. The decision of the Bosnian Serb Republic to secede is another problem lurking in the old continent. It was a solution to this situation without a war that caused French President Emmanuel Macron to spend 6 hours with his Russian counterpart, Vladimir Putin. Putin’s statement at the press conference he held with Macron, “If Ukraine joins NATO, there will be a war,” expresses the advanced stage of Ivanov’s words in 2004.

On the other hand continental Europe faces a dilemma against Russia. The first is the EU’s deterrence problem against Russia. Putin also knows that after Brexit, France could not provide sufficient deterrence with its 300 nuclear warheads and its defence structure dependent on the USA. Berlin and Paris face the syndrome of being left alone by Washington in the face of Moscow’s nuclear threat, just as they did in the 1956 Suez Crisis. The threat that “you all lose in nuclear war,” that Putin said at the press conference with Macron, must have reminded Macron of the humiliation of De Gaulle, who sought to ensure European security independently of the United States. The Suez Crisis had bitterly shown De Gaulle’s France that they could no longer act alone and that they needed the USA against the Soviets. Losing its Suez concession, Britain largely abandoned its imperial past to the United States, while the French leader De Gaulle took another route: the EU.

Today, the Ukraine war threatens De Gaulle’s ideal of the EU, as well as Transatlantic relations. On the other hand, the “warless solution” strategy of the EU led by France and Germany means that Eastern Europe will come under the hegemony of Moscow again. Because the Bosnian Serb Republic’s decision to leave the fragile federation right during the Ukraine crisis is the next threat to the EU.

The agreement reached by King of England Edward VII. and his nephew Russian Emperor Nikolai II. during the Reval Negotiations in 1908, cleared the way for Russia in the Ottoman Balkans and Turkish straits. This situation first caused the First World War and after 20 years later caused the developments triggered the Second World War. Ukraine crisis today could have a similar domino effect.

There is a dilemma on the table for the USA and the EU: give Russia what it wants or force it into war and plunge it into a long and exhausting conflict. Both situations mean going back to 1990’s for continental Europe. For Washington, it’s a ‘Prisoner’s Dilemma’ that will offer an opportunity to strengthen European dominance. Meanwhile Macron is trying to convince Russia of an intra-continental peace. However, on the same days, Italy seems to be disconnected from the EU enough to hold trade meetings with Russia. Despite the cautious attitude of the new German Chancellor Scholz in his meeting with US President Biden, his declaration that they will stop the ‘Nord Stream 2’ line and participate in sanctions in case of war, points out that the EU is far from unity. Berlin, like the 5+1 talks with Iran, is trying to strike a delicate balance in order for Germany to be at the table and to prevent Paris from stealing a role from it.

Whether conflict or diplomacy prevails, a new Yalta Conference seems inevitable after all. Moscow at that table could issue a visa to the remaining Ukraine’s NATO partnership in exchange for severing the region up to Transnistria from Kiev, thereby cutting off its connection with the Black Sea. It is also certain that Russia would like to see a recognition of Crimea as Russian territory. If Putin can do this without firing a shot, he can be seen as a victorious commander who has once again planted the red flag on the Reichstag.

In return, the USA will both consolidate its dominance in continental Europe and will try to use Russia against its main target, China. Just as he used China against the Soviets in 1972. Despite all the USA’s haste, Beijing is likely to repeat the cautious stance of 1972. On this subject, Kissinger’s conversation with Chinese Leader Deng can shed light on our day. Because at the first meeting, Kissinger brought the word to China’s closed communist regime and asked Deng, ” What was the impact of the French Revolution?” Kissinger’s goal was to learn when the Chinese regime would open up to global capitalism through the French revolution. The answer the Chinese statesman gave to Kissinger that day is still valid today: ” Too early to say.”